ITF Juniors' world no. 1 ranking in Eala's hands after repeat win over Noskova

ITF Juniors' world no. 1 ranking in Eala's hands after repeat win over Noskova 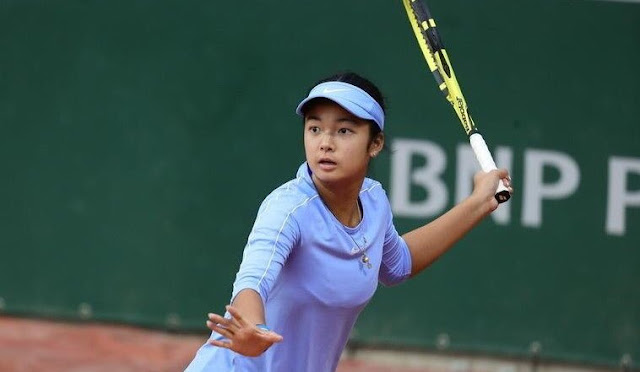 MANILA--Alex Eala extended her dream run at the 2020 Roland Garros Girls Juniors' Singles competition after eking out a come-from-behind 4-6, 6-3, 6-2 victory over Linda Noskova of Czech Republic in their quarterfinals match at Court 12 on Thursday night.

The 15-year-old second seed erased her opening set setback after a much better performance off her first serves and limiting Noskova to just a measly 33 percent (3-of-9) break point conversion rate in the second and third sets to secure the victory in their second career meeting in clay court after almost two hours of battle.

Eala first beat Noskova at the 2018 Les Petit As final in Tarbes, France, located 823 kilometers south of Stade Roland Garros, where the French Open is being held. Coincidentally, both Eala and Noskova also made their Slam debut here two years ago after earning a wildcard from the French Tennis Federation after their epic championship match.

Eala initially called for a medical timeout at the end of the second set and immediately fell behind at the decider after the Czech world number 33 broke her in her first service game before she answered by winning four straight games and never looked back since.

With the win, Eala became the first ever Filipino juniors' tennis player to make it into the semifinals of a juniors' singles competition at a Grand Slam since the legendary Felix Barrientos bowed out of the final four of the 1985 Wimbledon.

Eala's victory also means that the Rafael Nadal Academy scholar now controls her destiny to become the world number one at the ITF Juniors' Girls rankings by next week as she is now the highest seeded player left in the draw after top seed and title-favorite Victoria Jimenez Kasintseva crashed out of the competition in the second round.

The ITF Juniors rankings is based on a 'best six' result of a particular player's singles and doubles tournaments over a 52-week rollover system.

Depending on the results of the semifinals tonight, Eala can either become the world number one or two by Monday, barring unforeseen circumstances.

With a guaranteed 475 points after reaching the semifinals, the current world number four has already overtaken Kasintseva, Dianne Parry and Daria Snigur atop the rankings.

But with her semifinals opponent and world number six Elsa Jacquemot, as well as, world number eight Polina Kudermetova both still in the mix, Eala's bid to join Manny Tolentino as the only two Filipino juniors tennis players to become world number one will not be official unless she hoists this year's trophy or records a win on Friday night over Jacquemot and witnesses a Kudermetova loss against her compatriot Alina Charaeva at the top half of the draw.

Eala and Jacquemot will meet not before 8 p.m., Manila time, after the boys' singles semifinals between Dominic Stricker and Juan Bautista Torres at Court 14.