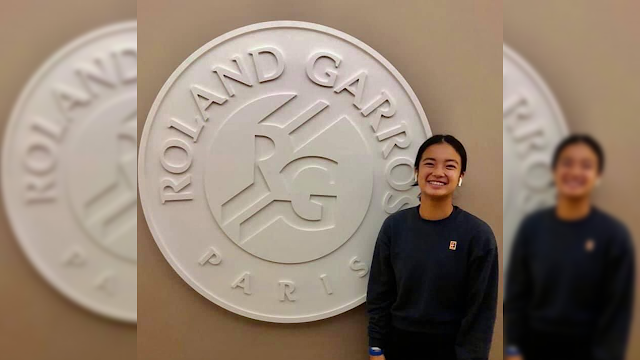 By Kristoffer Ed Bellen
MANILA--Teenage tennis star Alex Eala will open her 2020 Roland Garros juniors' girls singles competition on Sunday against Natalia Szabanin of Hungary to kick off her second and final Grand Slam tournament this season.
Eala, who is also the second seed in this year's French Open, have not played against Szabanin before and will look to power her way through her bracket which also includes seventh seed Maria Bondarenko of Russia, 12th seed American Alexandra Yepifanova and 16th seed Jana Kolodynska of Belarus.
The world number four was drawn at the bottom half of the draw and is not likely to face a seeded player until the third round where she could potentially meet Bondarenko or Yepifanova barring unforeseen circumstances.
On the other hand, this year's top seed and 2020 Australian Open Juniors' Girls Singles champion Victoria Jimenez Kasintseva will battle against French wildcard Shanice Roignot. Both Eala and Kasintseva are this year's favourites to battle each other in the final.
Eala, who, herself, won the juniors' girls doubles title in Melbourne alongside Indonesian Priska Nugroho, failed to duplicate her performance in the singles' event last January after succumbing to Hong Kong's Hong Yi Cody Wong in the third round.
The 15-year-old netter, meanwhile, will also pair up with her 2019 US Open doubles partner American Elvina Kalieva for this year's competition.
Eala made her debut at Roland Garros in 2018 after winning the Les Petit As competition and was given a wildcard entry by the French Tennis Federation.
This year's tournament will be held from Oct. 4-10, Manila time.
Follow him on Twitter: @KristoffBellen