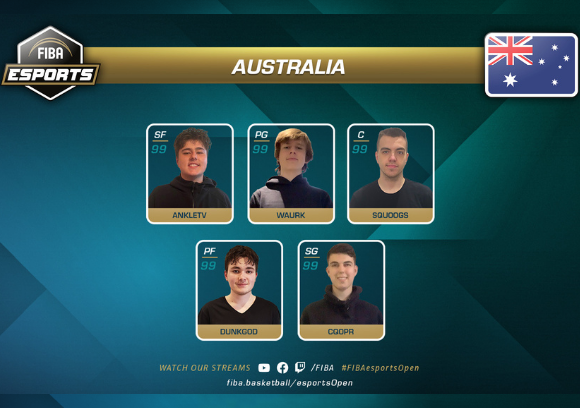 MANILA--Australia became the undisputed champion of the now merged Southeast Asia-Oceania Conference of the FIBA Esports Open after sweeping Playbook Laus Esports-Philippines in the best-of-three finals on Sunday night.

In a unification bout of sorts, the inaugural Oceania champ bounced back from its 45-76 loss in its finals preview against the SEA champ right before the championship series proper in style.

After a close first quarter, Australia began pulling away late in the second quarter of the Finals Game 1 as Jonte Burns caught fire and made 13 points by halftime.

PLE tried to pull off a comeback and was actually within six, 56-62, but a bad pass from Rial Polog down the stretch halted the rally and Australia escaped with the 64-56 win.

Cooper Cameron and Kyle Vassallo, who started the event as a reserve but eventually replaced Cameron Sloper in the main team due to his long range exploits, then caught fire from beyond the arc to set up Australia's killer blow, a 69-54 Game 2 victory to complete the sweep.

All series long, Australia put up great defense on PLE's sniper Aljon Cruzin, putting him out of rhythm most of the time.

Custer Galas, who has been an expert on corner triples, struggled to hit the excellent mark in NBA 2K21 ProAm mode as well.