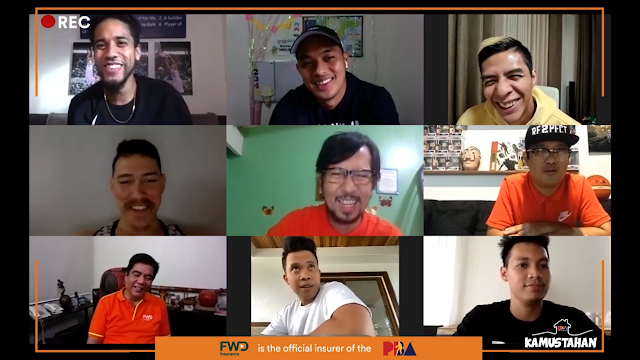 MANILA--Players of the Philippine Basketball Association (PBA), regarded as heroes by the sports-loving Filipino public, continue to inspire their audience in Episode 11 of the online series “PBA Kamustahan”.

Away from the courts, PBA paragons Gabe Norwood, Scottie Thompson, Arwind Santos, Robert Bolick, Baser Amer, and Garvo Lanete narrated how they maintained a solid defense against the worst effects of the pandemic while scoring points to keep themselves and their loved ones safe, healthy, and financially secure, especially in the face of the unexpected.

The “PBA Kamustahan” episode can be viewed via this link.

For customers who might find themselves in a similar situation like the PBA players, FWD Insurance also launched its #WeKanDuuThis campaign in the Kamustahan episode to highlight the relevance of financial protection in these times through its digital products, KanMend and KanLive. Together, they form a firm financial foundation to inspire confidence in the future.

“As PBA’s official insurer since 2016, we’ve encouraged Filipinos to pursue their passion in basketball and live life with less hesitation. We strive to inspire positivity especially during these trying times,” said Roche Vandenberghe, FWD Insurance’s vice president and head of marketing. “Together with the PBA, we encourage them to financially protect themselves and their loved ones, so they are prepared for anything and can seize every opportunity to celebrate living.”

Some of the PBA players shared their brushes with the unexpected.

Thompson admitted that one of the painful things he experienced was closing several of the branches of the gym business he owns and letting go of some of the employees who had been with him for some time. He also took another gig, “Okay naman! Habang walang PBA, construction worker muna!”

Lanete of NorthPort Batang Pier opened up about the greatest thing that he had to give up during the pandemic: “My biggest sacrifice—yung wedding ko dapat nung June. Ginawa namin, next year na lang para mas safe.”

Many of the PBA players used the time the games were suspended to spend more time with their families.

Amer of the Meralco Bolts named one of the highlights of his day: “Nakikipaglaro ako sa baby ko.”

Norwood of Rain or Shine Elasto Painters gets his adrenaline rush from other sources these days: “Having three young boys is a workout in itself. I like to think I’m getting my cardio-related exercises just chasing them around the house.”

Santos of the San Miguel Beermen shared his deepened appreciation for his family, especially his wife.

Bolick of NorthPort Batang Pier could finally recover from the knee injury he suffered last October and prepare again for practice once sports playing is allowed again.

All the players continue to maintain their fitness regime to be on top of their game and rebound to perform at their best.

PBA commissioner Willie Marcial also elaborated on the importance of the support that they had been getting from FWD Insurance.

“Some of our employees who had critical illnesses received their benefits. This is why being insured is especially important because life can be uncertain,” he said.