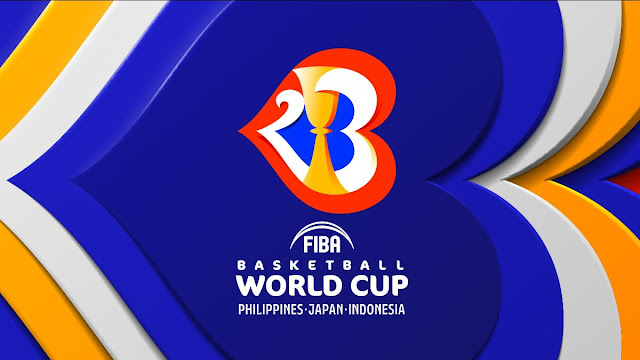 MANILA--The passion for the game is the central theme of the official logo for the 2023 FIBA World Cup, which the Philippines, Japan, and Indonesia will co-host.

The theme is evident with the heart sign, which symbolizes "puso", Gilas Pilipinas' battle cry.

The three colors, red, white, and blue, represent the three countries, which will become the first set of multiple nations that will host the same World Cup.

The white heart bears the number 23, the last two digits of 2023 with the Naismith Trophy being the centerpiece.

"This is a very exciting milestone. The distinctive FIBA Basketball World Cup 2023 logo symbolizes our love for the game, which is shared by the organizing committees and FIBA, and it also represents the vision and passion of the event that brings together, for the first time, three host countries," said FIBA secretary general Andreas Zagklis on Friday.

"The official logo launch is the first exciting step of many for all three host nations, for FIBA and basketball fans worldwide. The logo certainly represents all three host nations' spirit of uniting and working together with the same heartbeat to deliver the best basketball experiences that fans could ever have," added PERBASI president Danny Kosasih.

In a statement, FIBA said, "The Dont Miss a Beat campaign aims to encourage all fans to have fun with music beats linked to basketball on social media channels such as a dribbling contest, among other highlights.

They can participate by using the hashtag #DontMissABeat in their social media posts.

Some Gilas Pilipinas Men, Akatsuki Five, and Indonesian players will join the fun as the campaign goes on.

"On this special occasion, we would also like to ask basketball fans around the world to be part of this extraordinary event by taking part in the Don't Miss a Beat campaign. Join us and be part of this historic event," Kosasih pleads.