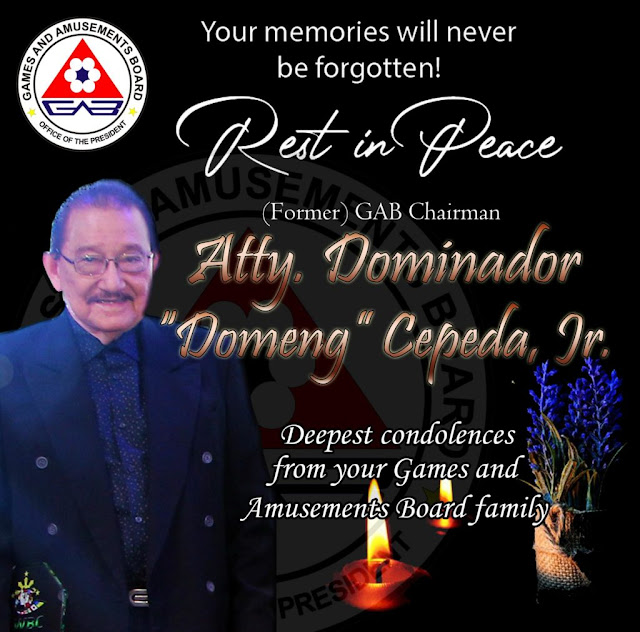 MANILA--The Games and Amusements Board is saddened by the passing of former chairman Dominador "Domeng" Cepeda.

Cepeda passed away on Saturday at age 86.

He led GAB from 1994-2001 at a time where professional sports began soaring to greater heights.

Cepeda witnessed the PBA blossom in what has arguably been its best days with Commissioner Jun Bernardino at the helm.

Cepeda also witnessed the rise of the MBA during the final years of his term and how the defunct league became the blueprint of how the current regional leagues like the professional NBL and the Pilipinas VisMin Super Cup and the "semi-pro" MPBL are being organized.

But it was in boxing where he became more well known.

Cepeda was the one responsible for having the World Boxing Council organize its annual seminar at the Manila Hotel in 1996.

Under his leadership, Luisito Espinosa, Philippine boxing's biggest name then, got to defend his WBC featherweight title twice in front of his fellow Filipinos.

Cepeda also became the president of the Oriental Pacific Boxing Federation, WBC's affiliate arm in the Asia-Pacific region, in 1998 even as he also had a role as a Philippine representative to the World Boxing Association.

After leaving GAB, Cepeda did not leave the boxing front office as he, a lawyer, was named the WBC Asia legal counsel.

His leadership was immortalized in 2019 when he was honored alongside fellow former GAB chairmen in the first Professional Sports Summit at the PICC in Pasay.

"We recognize his efforts and invaluable contributions to the growth of professional sports in the Philippines. He is truly an inspiration and his memory will live on forever," current GAB chief Baham Mitra said on Monday. "We are saddened by the loss of Former GAB Chairman Dominador Cepeda Jr."

Prior to taking the GAB chairmanship, Cepeda was a commissioner for the Philippine Sports Commission, even being in the same office as Cito Dayrit, who passed away on Wednesday night.

Dominador Cepeda GAB Games and Amusements Board other sports