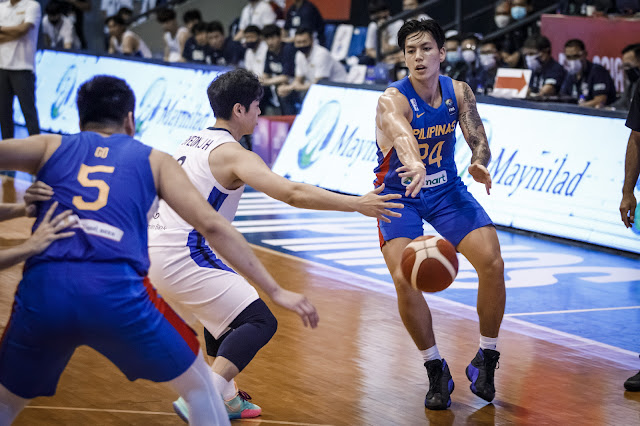 MANILA--Gilas Pilipinas held on despite a gritty stand from South Korea to complete a 6-0 sweep of Group A play in the FIBA Asia Cup Qualifiers through an 82-77 win on Sunday at the Angeles University Foundation Sports and Cultural Center.

The Koreans somehow fizzled down the stretch, leading to clutch moments from Gilas to seal its second straight win against its archrival.

Despite South Korea clicking with its well known perimeter game, Gilas responded with crucial field goals of its own.

The big moment happened with 31 seconds left in the game when Will Navarro saved Gilas' play despite South Korea nearly forcing the steal, finding Balti Baltazar for the slam dunk that put Gilas' lead at four, 79-75.

Ricardo Ratliffe responded with a quick layup to cut the lead down to two, 79-77, with 25.5 seconds remaining.

However, Lee Dae-Sung was whistled for an unsportsmanlike foul while trying to stop SJ Belangel from getting the inbound.

In the extra possession, Dwight Ramos also went 1-for-2 from the free throw line, but he grabbed the offensive rebound off his own second charity miss, leading to another split from the stripe for the final tally.

Ricardo Ratliffe, playing through an undisclosed minor injury, made his first six field goals before finishing with 20 points, 13 rebounds, and three assists.