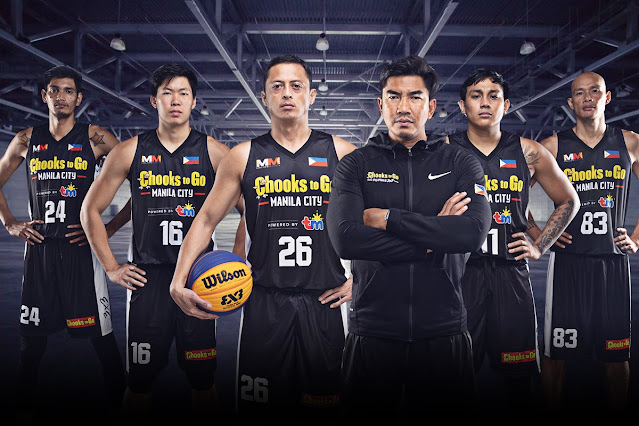 MANILA—Manila Chooks TM plunges back into action in the FIBA 3x3 pro circuit.

This will be Manila Chooks TM's second tournament this year since the Doha Masters last March 26.

In Montreal, Manila Chooks TM is seeded 11th among the 12 teams.

"The team is hungry to redeem themselves," said Chooks-to-Go president Ronald Mascariñas. "They have been ready since May but unfortunately their Croatian visas did not make it in time for the FIBA 3×3 Lipik Challenger.

"There have been a lot of challenges faced by the team brought about by the current pandemic but we are confident that frequent participation in the FIBA 3x3 pro circuit will only make the team stronger," he added.

Due to the heightened quarantine in Luzon, head trainer Aldin Ayo has been limited to training the team online for the past month.

"With regards to conditioning, there will be no problem as we made sure that the players figured in high-intensity workouts," said the decorated tactician. "The chemistry will also be there since the team has been together for three months already.

"But the tournament itself is a different beast. With the limitations that we have, we studied a lot of films on our possible opponents and we are hoping that the preparations translate to winning games," he continued.

Crack is the field for this maximum level tournament that has US$110,000 in its prize pool -- including US$40,000 for the champion.

World no. 2 Riga of Latvia headlines the field along with no. 4 Ub of Serbia, no. 7 Amsterdam of the Netherlands, no. 8 Antwerp of Belgium, and no. 10 Edmonton of Canada.

Completing the field are USA's Princeton, Switzerland's Lausanne, Lithuania's Raudondvaris, Canada's Old Montreal, USA's Omaha, and one more team that will qualify through a Quest event.

The pools will be determined during the technical meeting on Sept. 3.

Manila Chooks TM will have their RT-PCR tests on Tuesday and will leave the country the following day.

"We are hoping for a good result in Montreal as this tournament will be the starting point for our domestic season," said Mascariñas.