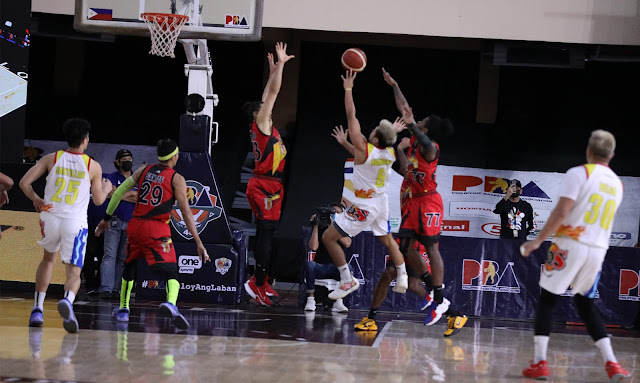 MANILA--You can now make it official now: Rey Nambatac is Rain Or Shine's main man in the clutch.

Coach Chris Gavina that he really intended to have the six-foot combo guard as the team's closer this season as evidenced in its final play against San Miguel on Sunday at the Don Honorio Ventura State University Gym in Bacolor, Pampanga.

Usually the starting point guard for the Elasto Painters, Nambatac came off the bench and only played 19 and a half minutes against the Beermen.

But with the game on the line, Nambatac was called up.

"I always talked to Rey being ready to be our closer, and I could tell he wanted to play," Gavina said.

He then set up what should have been the play in his mind.

"I'd already designed a play where he would get the ball either at the top of the key or if we get it to the post, it would be a hand-off to him," Gavina bared the supposed play.

But SMB's defense forced Nambatac to be at the right corner with time winding down.

That's where Nambatac's magic came into play, blitzing through a baseline drive against three defenders for the eventual game-winner for ROS.

"Rey's playmaking was all him. I got him the ball, and he's the one that was able to go with his instincts and make that game-winning basket for us," Gavina further said.

He then said he would map a similar clutch play to Nambatac all over again.

"I have no fear of getting the ball to Rey's hands and knowing that he'll come up with something that's going to come out of the positive effect with what happened today, and that's exactly what happened with that play," Gavina vowed.