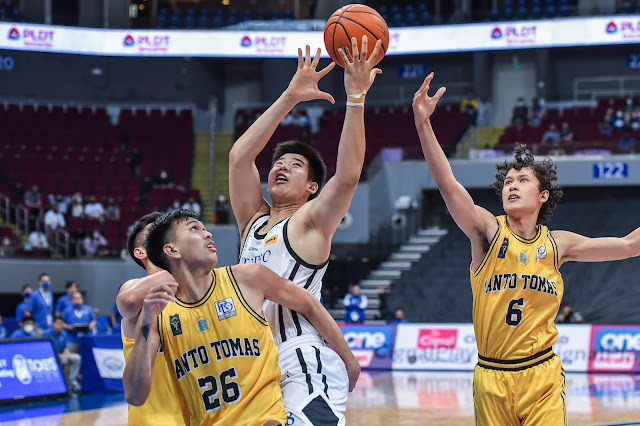 The University Athletic Association of the Philippines has sanctioned University of Santo Tomas' Bryan Santos with a one-game suspension for an uncalled disqualifying foul the committed during their game against Ateneo de Manila University last Saturday.With 16 seconds left in the contest, Santos appeared to hit Ateneo's Geo Chiu with an elbow.After careful review by basketball commissioner Tonichi Pujante and his team, it was deemed that the hit was a deliberate act of violence and not a legitimate basketball play.Santos will serve his suspension during UST's game against University of the East on Tuesday, April 12.Also suspended for one day without compensation is the referee who missed the call.The referee's identity was withheld by the league for privacy reasons.Chiu, meanwhile, will also be summoned by the Commissioner's Office on Tuesday. Upon review, Chiu seemed like he deliberately hit UST's Christian Manaytay chest with his arm and shoulder at the 15-second mark of the fourth quarter.Also summoned by Commissioner Pujante are Ateneo head coach Baldwin (conduct unbecoming of a head coach), team manager Christopher Quimpo (conduct unbecoming of a team manager), and assistant coach Ford Arao (conduct unbecoming of an assistant coach).Meanwhile, La Salle's Justine Baltazar has also been asked to meet the commissioner on Tuesday. Pujante deemed Baltazar's box out on Adamson University's Keith Zaldivar last Saturday was excessive. The incident happened at the one minute and 43 second mark of the second quarter.