MANILA - Almost two weeks after Thomas Dooley reinstated as Azkals' head coach, the 25 players are already on their way to Ulaanbaatar, Mongolia for the final round of the AFC Asian Cup Qualifiers to cast their bid for the second straight appearance of the national team in the Asian Cup since 2019 debut.

However, too many drama were developed that drew the attention between the fans and the head coach as Stephan Schrock left behind to enlist for the important campaign.

One day prior for the released of the roster, the 2019 Mr. Football Player of the Year and the 2019 ASEAN Best XI tweeted about the allegations of unprofessional treatment anew by Dooley after the Azkals' defeat vs. PFL All Stars, 1-0, in Binan Football Stadium. 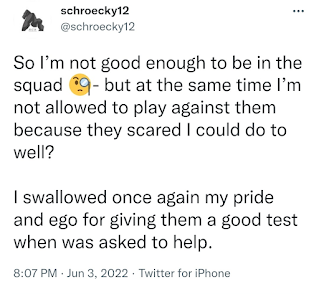 Fans left theorized again upon the possible alive of the personal issues between Dooley and Shrock which already happened during the Dooley's tutelage in 2016.

Schrock and retired Dennis Cagara resigned in the national team over conflicts and disagreements because Dooley's coaching endeavors.

Before the cryptic tweet, Dooley already clarified on his interview before CNN Philippines that no personal mixed on his decision to not include Schrock in the final lineup.

"When he wasn't there with the team, we had the biggest success and we played beautiful football and the reason why I made a decision (to exclude Schrock) because I need to build a team that can be successful again", he said on his interview with Sportsdesk of CNN Philippines.

Currently, Schrock had no affiliated ballclub after him and the United City mutually agreed to terminate his contract but he made his stint for the Azkals U23 in the recent SEA Games in Hanoi last month.

Etheridge, Maranon to lead the 25-man lineup, Menzi gets the late call

The Birmingham City and newly-assigned Team Captain Neil Etheridge will lead the 25 official roster for the national team together with Kuala Lumpur City's Kevin Mendoza, United City's Anthony Pinthus listed as custodians for the national XI.

"UNDERDOG" for Azkals in absence of key players, Holtmann-less vs. Yemen.

Before the cut, Dooley announced on his official Facebook account that some key players will miss the tournament due to injury including are Raphael Obermair, Patrick Strauss, Michael Kempter, Carli De Murga, Kevin Ingresso, Amani Aguinaldo, and Diego Bardanca.

The winger for Bundesliga's Vfl Bonchum Gerrit Holtmann will personally appear in Mongolia after the Azkals' first match vs. Yemen this June 8.

Afterwards, the Azkals will clobber against the host Mongolia on June 11, and their rivals Palestine on June 14 for the leadership in Group B or to catch five slots in the best runners up to qualify in the 2023 Asian Cup.

Despite with the big blow in the absence of seven key defenders, Dooley ended in his post, "Giving-up is NEVER an option."