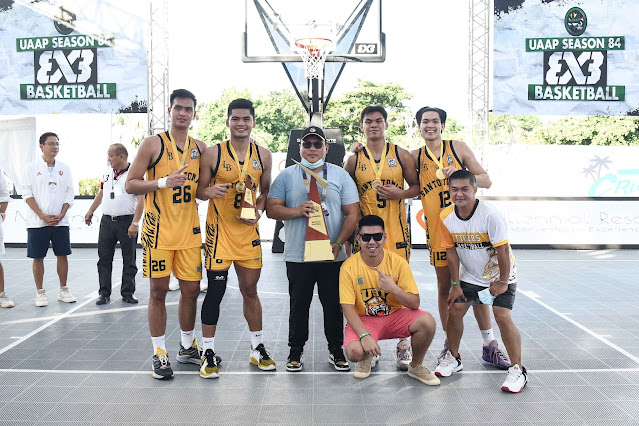 CALATAGAN, Batangas -- University of Santo Tomas came back from nine points down to knock De La Salle University and win the UAAP Season 84 3x3 men's championship, 21-20, in the Final at the CaSoBe resort here, Friday afternoon.

Down by as much as nine, the Growling Tigers waxed hot from deep as Sherwin Concepcion and Nic Cabañero buried three deuces to inch within a point, 17-18.

Ben Phillips though answered with his own conversion from two-point arc to put the Green Archers a point away from the title, 20-17.

But Cabañero nailed another triple before Concepcion finished the game with a deuce with 2:15 left.

Finals MVP Concepcion had 12 points, all from deep. Cabañero got four points.

In the semifinals, DLSU had to go through a needle to dispose of fourth spot National University, 19-17.

Lim and Phillips uncorked seven points apiece for the Green Archers, while combining for five deuces.

JM Crisostomo led the Bulldogs with seven points but needed 13 shots to do so.

On the other hand, UST blew past third seed University of the Philippines, 21-12.

Cabañero led the way with 11 points on 7-of-12 shooting from the field, while Concepcion, who ended the game with a two-pointer with 2:55 to spare, had seven points with eight rebounds.