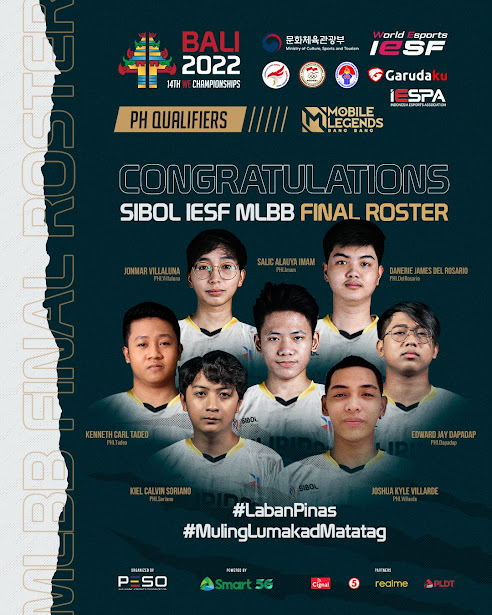 The Codebreakers are back again in national team duty – this time, with old and newly-minted knights in their packed helm.

Sibol officially announced the seven-man squad that will represent the Philippines in the upcoming 2022 IESF World Esports Championship in Bali, Indonesia, revealing the inclusion of Blacklist International's main five on Monday night through a Facebook post.

Though OhMyV33NUS, Wise, and Hadji were together in steering the country to a golden two-peat in the 2021 Hanoi SEA Games, the other two failed to suit up for the national team due to the biennial meet's age restrictions, thus making this their first time for such.

As part of Sibol's tradition, the official lineup will run a surname-themed in-game name with PHI, the country's code, which will run as follows:

Both Blacklist and MHRLK took a tiring road in fighting for national team slots upon battling several amateur and professional teams in the tiff's three-day Philippine Qualifiers before reaching the finals, which locked their participation to the next phase of the selections.

The finale then saw a thrilling see-saw series, but it was the defending world champions who got the best of their amateur adversary on a 2-1 winning escape.

Roughly a week after, the two squads faced once again in a three-day Draft Combine, but this time, their rosters were mixed, mostly marked by switching either their gold laners or both their gold and EXP laners.

The Filipino troop will start their campaign in December in hopes of notching a new gold feather in the country's decorated cap in the international MLBB scene.