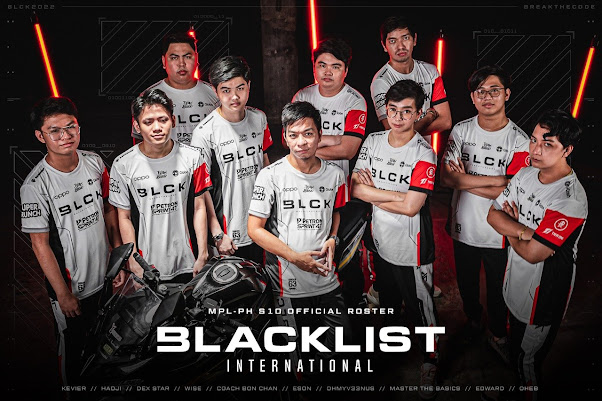 MANILA — After a long layoff, the King and Queen of Philippine MLBB, and their trusted knights are finally returning to their kingdom.

Blacklist International finally unveiled their MPL Philippines Season 10 roster on Sunday night, revealing the return of their iconic V33Wise tandem and the retention of their core group on a biker-inspired three-minute trailer.

Furthermore, Kristoffer Ed "Bon Chan" Ricaplaza and Aniel "Master the Basics" Jiandani, together with Mark Jayson "Eson" Gerardo and Dexter Louise "Dex Star" Alaba will remain in the sidelines as their coaches and substitute-analysts, respectively.

Their official lineup will run as follows:

Still winning while on a break

After a dominant 2021 run, which saw BLCK win MPL Seasons 7 and 8, and M3; and clip runner-up finishes in both the Mobile Legends Southeast Asia Cup and One Esports MPL Invitational, the pair, known as V33Wise, skipped Season 9 to rest.

V33Wise, together with Edward, Oheb, and Hadji, then saw action in Sibol's draft combine tiff for the upcoming 2022 IESF World Esports Championship in Bali, Indonesia, where they are presently battling for lineup slots against amateur team MHRLK Esports.

Their and the Tier One-backed troop's inclusion to the national esports team's pool again came after escaping their current adversary on a 2-1 thriller in the international tourney's Philippine Qualifier finals last July 10.

However, the two-time MPL winners fumbled in Season 9 on the legendary duo's absence, settling on a dismal eighth place with a 3-11 (13-24 in games) win-loss slate.

Upon their return, the decorated tandem and the defending M-Series kings are expected to start their revenge tour and #DefendTheCrown campaign in the league's 10th edition this August.