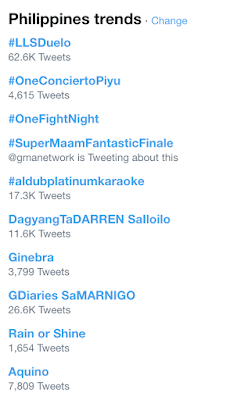 What further helped the event trend was the live broadcast of the undercard matches on Twitter. The "Twitterverse" witnessed Edward Kelly and Jomary Torres' emphatic knockouts as it happened inside the MOA Arena. The said live stream generated 404,000 views.

We’re LIVE from Manila, with the first 6 bouts of ONE #GlobalSuperheroes. https://t.co/zXULV5zwtn
— ONE Championship (@ONEChampionship) January 26, 2018

Twitter also erupted when Joshua Pacio submitted Lan Ming Qiang and Geje Eustaquio captured the interim One flyweight title against Kairat Akhmetov in the two featured bouts of the night.