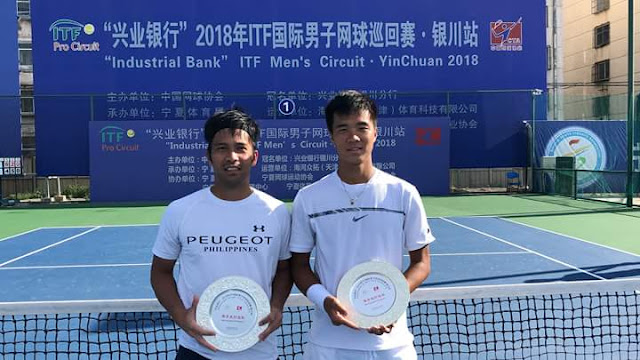 MANILA--Fourth time's the charm for Francis Casey Alcantara and partner Fajing Sun as they clinched their first ever title together after eclipsing Kento Takeuchi and Wishaya Trongcharoenchaikul, 6-4, 2-6, 10-5 at the ITF China F8 Futures, Saturday.

Alcantara and Sun scored six service points in the tiebreaker third set to seal the deal inside the Ningxia Stadium in Yinchuan, China after one hour and 12 minutes and pocket the US$ 25,000 prize money of the seven-day affair sanctioned by the International Tennis Federation under the Pro Circuit division.

The duo, who have been teaming up for the last two months since the China F5 Futures, saw their first title together coming into their hands after reaching quality stages in their three previous tournaments that included two semifinal and one final appearances.

"(It) felt really good. I finished with a bang here in China, so happy we finally got the win after four tries," Alcantara told Dugout Philippines in an online interview.

The 26-year-old Filipino tennis player first teamed up with Sun at the China F5 and F6 Futures where they reached the semifinals of both tournaments before he and the Chinese reunited to reach the final at the China F7 Futures last week after winning his first title in Singapore with American Collin Altamirano.

Alcantara and Sun weathered a poor outing from the service line after winning five of their nine service games while also breaking Takeuchi and Trongcharoenchaikul thrice despite committing a total of seven double faults.

The Filipino and Chinese pair had a chance to close it out in the second set but the fourth seeded Takeuchi and Trongcharoenchaikul denied to bow down easily after capitalizing on the former's four double faults in that 29-minute second set and dominate them by firing 29 winners in that frame alone.

Takeuchi and Trongcharoenchaikul leveled with Alcantara and Sun's total points won at 57-all while also converting four of their six break points.

In the end, though, it was the top-seeded Alcantara and Sun who managed to turn the tides to their side after limiting the latter to just five points in the 12-minute tiebreak.

"We just stayed positive in the third set," said Alcantara.

"(I am) more confident in my game now. I just have to work even harder in my next tournaments," he added.

Alcantara will head back home for a ten-day rest before he travels to Hong Kong to compete for two weeks and goes to Canada to play in the ATP Challenger Tour.