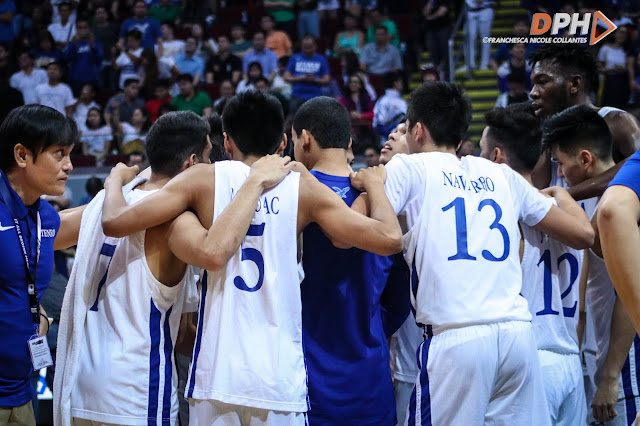 MANILA - The Ateneo Blue Eagles secured a spot in the Final Four after their win against the National University Bulldogs last Oct. 27 at the Araneta Coliseum.

Despite this being a crucial match for the Eagles, the team treated it like any other eliminations game.

According to Assistant Coach Sandy Arespacochaga, the Blue Eagles prepared to face NU just as they would against any other team.

“Our game plan was just focusing on NU – not looking beyond this game, so that’s been the key point that we’ve been stressing,” he mentioned.

However, more than the game plan, the coaching staff of Ateneo focused on the proper mindset the boys should have inside the court.

“It’s something we’ve talked about: what’s our attitude when we have a big lead?” Coach Tab Baldwin mentioned.

This is something that Ateneo has been struggling with throughout the season. The team often finds themselves at a good start, usually leading by double figures at the end of the first half; though, they seem to struggle to keep the same tenacity entering the second half. They often find themselves slowly slipping away, sometimes so bad that the momentum had shifted completely.

This is why Coach Tab stresses the importance of consistency for his players. He talks about the team needing consistency in terms of mindset no matter what the score and situation is.

This mentality will be critical, especially as Ateneo prepares to face off the only team they have not had a win against, the Adamson Soaring Falcons.

“I guess there’s a sort of revenge factor, but we’re not, you know, we can’t be too emotional.” Coach Sandy added.

During the first round of the eliminations, the Ateneo Blue Eagles lost their opening match of the season against the extremely talented Adamson Soaring Falcons. The outcome came as a shock to Ateneo supporters, as the team place fourth when they represented the Philippines in the Jones Cup 2018.

Though this game is supposedly a time for pay-back for the painful blow they received at the season opening; the team remains calm, and focuses on planning and execution.

“It’s got to be intellectual also. We’ve got to come out with a good game plan.” he added.