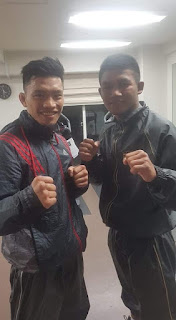 MANILA--After expressing his openness to compete in One Super Series, Lito Adiwang admitted that he is looking to go after reigning One muay thai flyweight champion Rodtang Jitmuangnon.

"Me against Rodtang shouldn’t just be a fantasy, it should be a reality," Adiwang said on Wednesday.

While he acknowledges Rodtang's "demolition style" of play, Adiwang thinks he saw one flaw in the champion that he can exploit if they get a chance to face off.

Being a former wushu sanda champion like his stablemates at Team Lakay, Adiwang has all the striking tools that can make him excel in One Championship's stacked kickboxing section.

However, he reiterated his former stand that his main focus is on One's main attraction, mixed martial arts.

Should Rodtang make the jump to MMA, Adiwang is wiling to become his first opponent.

"I would love to be the one to welcome him into our world," he further said.

Whatever the sport that they will play for, though, Adiwang vowed, "I will do my best to shock the world. I want to prove to the world that even an ordinary boy can do extraordinary things if he just believes in himself, puts in the work, and dedicates himself to achieving his goals."

If an Adiwang-Rodtang clash will be booked in the future, the former believes, "I know it’s going to be a good show."