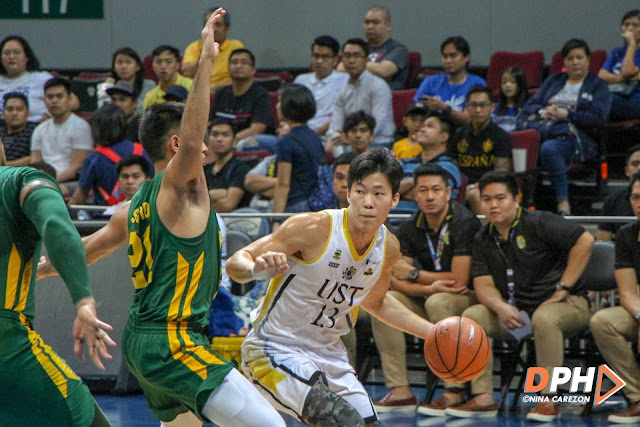 After three seasons, Zach Huang finally has the time of his life after playing for the UST Growling Tigers since Season 78. Huang only averaging 2.3 points and 1.7 rebounds in 8.2 minutes of action before.

As this 6'4 power forward highly motivated in this game and stepped-up for the Growling Tigers win with 20 points and 6 rebounds for their third win to improve their winning streak.

For Zach, the changes of the coaches before which led to the aftermath of his improvement. From Coach Bong dela Cruz who recruited Zach Huang in 2015, to Coach Boy Sablan, 2016-2017 and finally, to Coach Aldin Ayo this 2018. Coach Aldin Ayo unleashed the potential on Zach Huang that the past coaches didn't saw on him before.

Huang also told the reporters post game, "I didn't handle it well kasi the first coach ko siya yung nag recruit sa akin and then when we switched to another coach, I didn’t know how to handle it at first."

Huang also added that "I just go with the flow and what I did was I just give my all sa play and tinutulungan ako nila coach."

Huang just still keeps working and told the reporters that "Wala akong ginagawang special eh yung sinasabi ng mga assistant coach, I just follow them kasi I just do my part and then if may ginagawa akong mali sinasabihan ako and I'll self-reflect on it and then apply what I learn from that."

And with that the result is good as Huang's performance during this season as of now is with 9.2 points, 6.5 rebounds and 21 minutes rather than the first 3 seasons of Huang in the UAAP.